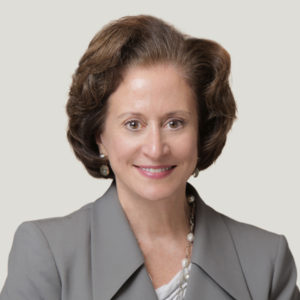 Annette L. Nazareth is a Senior Counsel of Davis Polk & Wardwell. She also currently serves as Chair of the Integrity Council for the Voluntary Carbon Market, a new governance body established to set and enforce global standards for the voluntary carbon market. Until recently, Annette headed the Trading and Markets practice in Davis Polk’s Financial Institutions Group, which is one of the most widely recognized practices in the field. Annette is an experienced financial markets regulator, former SEC Commissioner and a recognized authority on financial markets regulatory issues. She spent much of her career advising boards of directors on corporate governance matters and corporations that were subject to regulatory and enforcement actions. She also advised domestic and international clients, including broker dealers, swap dealers, exchanges, clearinghouses and other financial institutions across a board range of complex financial regulatory and legislative matters.

Annette began her legal career as an associate at Davis Polk after graduating from Columbia Law School and rejoined the firm as a partner in 2008. She served as a Commissioner of the SEC from 2005 to 2008. Prior to her term as a Commissioner, Annette served as Director of the Division of Trading and Markets at the SEC. She has also held positions in the financial sector, including as a managing director at Smith Barney, as a senior counsel at Lehman Brothers and as a partner and general counsel of Mabon, Nugent & Co. Annette currently serves on corporate boards, including Broadridge Financial Solutions, Inc. and MoneyLion. She also serves on several not-for-profit boards, including Urban Institute, Watson Institute, Protestant Episcopal Cathedral Foundation and the SEC Historical Society. She is also a member of the American Law Institute. Nazareth received an A.B. in 1978 from Brown University, where she graduated magna cum laude and Phi Beta Kappa, and a J.D. in 1981 from Columbia Law School, where she was a Harlan Fiske Stone Scholar.